Background: Praziquantel (PZQ), which possesses an asymmetric center, is classified as a pyrazinoisoquinoline and has been the mainstay in the treatment of schistosomiasis since 1980. PZQ undergoes a pronounced first-pass metabolism in the liver through the CYP450 system which could be mediated by nuclear receptors.

Objective: The purpose of this study was to investigate the possible different induction effects of CYP3A4 by PZQ racemate and enantiomers via the pregnane X receptor (PXR) and the effect of PXR polymorphism on the induction potency of PZQs.

Methods: The dual-luciferase reporter gene systems constructed in HepG2 cells were used to measure the abilities of PZQs to induce CYP3A4 expression mediated by PXR. The mRNA and protein levels of CYP3A4 were evaluated by polymerase chain reaction (PCR) and western blotting, respectively.

Results: In HepG2 cells transfected with PXRwt, PXR158, PXR163, PXR370 or PXR403 expression plasmids, PZQ racemate and its enantiomers up-regulated the luciferase activity in a concentration-dependent manner, while reaching saturation after transfected with PXR379 expression plasmids. The mRNA and protein expression of CYP3A4 was effectively activated in PXR-transfected HepG2 cells. The induction ability of CYP3A4 mediated by PXR activation by PZQ racemate and its enantiomers were statistically different between the same PXR group and different PXR groups.

Conclusion: The enantioselective induction effects of PZQs on CYP3A4 were related to the enantioselective activations of PXR by PZQs and were influenced by the PXR gene polymorphism. These findings provide a basis for further understanding the enantiomeric metabolism and the variable efficacy of PZQs. 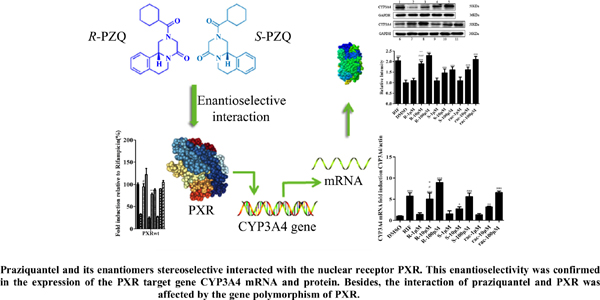