Bibliometric Analysis of Current Drug Metabolism: The Twentieth Anniversary from 2000-2019

Objective: The major objective is to perform the 1st bibliometric analysis of Current Drug Metabolism (CDM).

Methods: The data was retrieved from Scopus in April-May 2020 for detail analysis.

Results: The total number of publications was found to be 1551, with 955 reviews (61.57%) and 466 articles (30.05%). From 2000 onwards, we calculated the relative growth rate and doubling time. Based on the number of publications, total 4418 authors, 3235 institutions and 83 countries were directly involved in all publications. M.A. Kamal is the highly productive scientist with fifty-three (53 or 3.73%) publications, King Abdulaziz University is the top university with the highest number of publications (58 or 4.13%) and the USA is the top-ranked country with 365 publications (25.96%). We also provided the h-index, total citations (TC), h-index without self-citations (WSC) and total WSC of the top ten authors, universities and countries. In citations analysis, Prof. Zhou S.F. was the top scientist with the highest (1594) number of citations. In institutional category Department of Drug Metabolism, Merck Research Laboratories, Rahway, United States, is the top ranked institutes with 654 total citations. While, United States is the top-ranked country with 18409 total citations. In co-words analysis, 3387, 30564 and 17333 terms in titles of the manuscripts, abstracts and keywords were recorded, respectively. This indicated that CDM principally focused on understanding drug development ranging from its efficacy to delivery, metabolism, distribution, safety and mechanism of actions. Similarly, various specific drugs were thoroughly discussed in publications. Various enzymatic, genetics, proteins and cancer-related aspects were also described. For data presentations, we used VOSviewer graphical maps.

Conclusion: The data confirm that CDM showed continuous growth in the number of publications and citations. However significant measures are needed to make overall progress and improve the rankings in relevant categories. 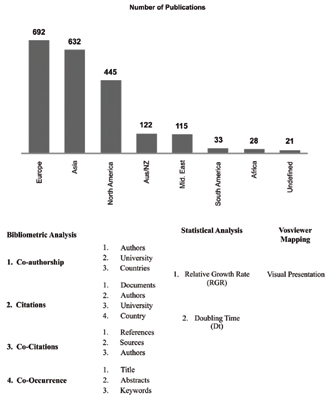