Background: Lung cancer is the leading cause of cancer-associated death worldwide with limited treatment options. The major available treatment options are surgery, radiotherapy, chemotherapy and combinations of these treatments. In chemotherapy, tyrosine kinase inhibitors and taxol are the first lines of chemotherapeutics used for the treatment of lung cancer. Often drug resistance in the clinical settings hinders the efficiency of the treatment and intrigues the tumor relapse. Drug-resistance is triggered either by intrinsic factors or due to the prolonged cycles of chemotherapy as an acquired-resistance. There is an emerging role of non-coding RNAs (ncRNAs), including notorious microRNAs (miRNAs), proposed to be actively involved in the regulations of various tumor-suppressor genes and oncogenes.

Results: The altered gene expression by miRNA is largely mediated either by the degradation or by interfering with the translation of targeted mRNA. Unlike miRNA, other type of ncRNAs, such as long non-coding RNAs (lncRNAs), can target the transcriptional activator or the repressor, RNA polymerase, and even DNA-duplex to regulate the gene expressions. Many studies have confirmed the crucial role of ncRNAs in lung adenocarcinoma progression and importantly, in the acquisition of chemoresistance. Recently, ncRNAs have become early biomarkers and therapeutic targets for lung cancer.

Conclusion: Targeting ncRNAs could be an effective approach for the development of novel therapeutics against lung cancer and to overcome the chemoresistance. 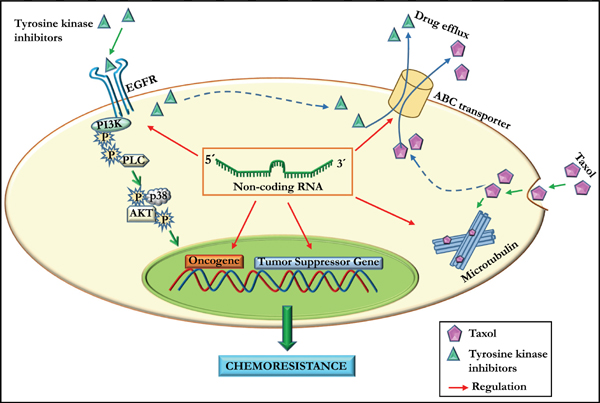