Background: Due to the potential advantages of Gadolinium Nanoparticles (NPs) over gadolinium elements, gadolinium based NPs are currently being explored in the field of MRI. Either in elemental form or nanoparticulate form, gadolinium toxicity is believed to occur due to the deposition of gadolinium ion (designated as Gd3+ ion or simply G ion).

Objective: There is a serious lack of literature on the mechanisms of toxicity caused by either gadolinium-based NPs or ions. Breast cancer tumors are often subjected to MRIs, therefore, human breast cancer (MCF-7) cells could serve as an appropriate in vitro model for the study of Gadolinium Oxide (GO) NP and G ion.

Results: A time- and concentration-dependent toxicity and oxidative damage was observed due to GO NPs and G ions. Bax/Bcl2 ratios, FITC-7AAD double staining, and cell membrane blebbing in phase-contrast images all suggested different modes of cell death induced by NPs and ions. 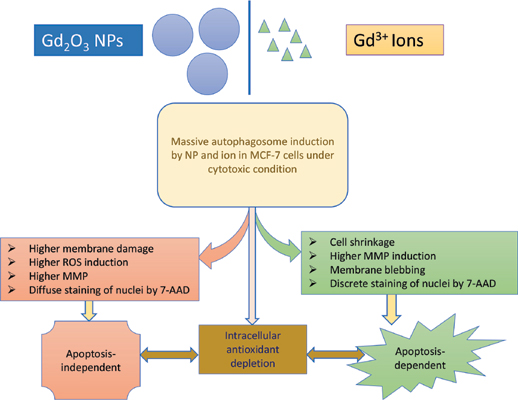