Background: This study aimed to re-establish a Population Pharmacokinetic (PPK) model of oral phenytoin to further optimize the individualized medication regimen based on our previous research.

Methods: Patients with intracranial malignant tumor requiring craniotomy were prospectively enrolled according to the inclusion criteria. Genotypes of CYP2C9*1 or *3 and CYP2C19*1, *2 or *3 were determined by real time PCR (TaqMan probe) method. Serum concentrations of phenytoin on the 4th and 7th day after oral administration were determined using fluorescence polarization immunoassay. The PPK parameters were estimated using Nonlinear Mixed Effects Models (NONMEM) and internal validation was performed using bootstraps. The predictive performance of the final model was evaluated by Normalized Predictive Distribution Errors (NPDEs) and diagnostic goodness- of-fit plots. Results: A total of 390 serum samples were collected from 170 patients in PPK model building group. The population typical values for Vm, Km and the apparent volume of distribution (V) in the final model were 17.5 mg/h, 6.41 mg/L and 54.8 L, respectively. Internal validation by bootstraps showed that the final model was stable and reliable. NPDEs with a normal distribution and a scatterplot with symmetrical distribution showed that the final model had good predictive capability. Individualized dose regimens of additional 40 patients in the external validation group were designed by the present final PPK model. The percentages of patients with serum concentrations within the therapeutic range were 61.53% (24/39) on the 4th day and 94.87% (37/39) on the 7th day, which were higher than the 39.33% (59/150) and 52.10% (87/167) of above 170 patients (P < 0.0001). Conclusion: The present PPK final model for oral phenytoin may be used to further optimize phenytoin individualized dose regimen to prevent early seizure in patients after brain injury if patient characteristics meet those of the population studied. 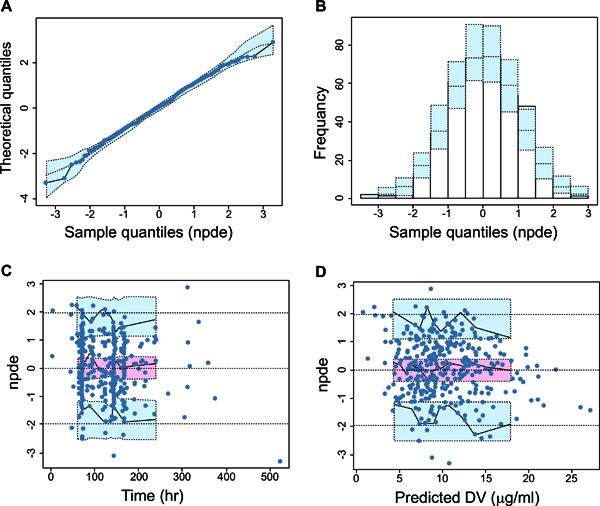