Background: The main drawbacks for using conventional antimicrobial agents are the development of multiple drug resistance due to the use of high concentrations of antibiotics for extended periods. This vicious cycle often generates complications of persistent infections, and intolerable antibiotic toxicity. The problem is that while all new discovered antimicrobials are effective and promising, they remain as only short-term solutions to the overall challenge of drug-resistant bacteria.

Objective: Recently, nanoantibiotics (nAbts) have been of tremendous interest in overcoming the drug resistance developed by several pathogenic microorganisms against most of the commonly used antibiotics. Compared with free antibiotic at the same concentration, drug delivered via a nanoparticle carrier has a much more prominent inhibitory effect on bacterial growth, and drug toxicity, along with prolonged drug release. Additionally, multiple drugs or antimicrobials can be packaged within the same smart polymer which can be designed with stimuli-responsive linkers. These stimuli-responsive nAbts open up the possibility of creating multipurpose and targeted antimicrobials. Biofilm formation still remains the leading cause of conventional antibiotic treatment failure. In contrast to conventional antibiotics nAbts easily penetrate into the biofilm, and selectively target biofilm matrix constituents through the introduction of bacteria specific ligands. In this context, various nanoparticles can be stabilized and functionalized with conventional antibiotics. These composites have a largely enhanced bactericidal efficiency compared to the free antibiotic. Conclusion: Nanoparticle-based carriers deliver antibiotics with better biofilm penetration and lower toxicity, thus combating bacterial resistance. However, the successful adaptation of nanoformulations to clinical practice involves a detailed assessment of their safety profiles and potential immunotoxicity. 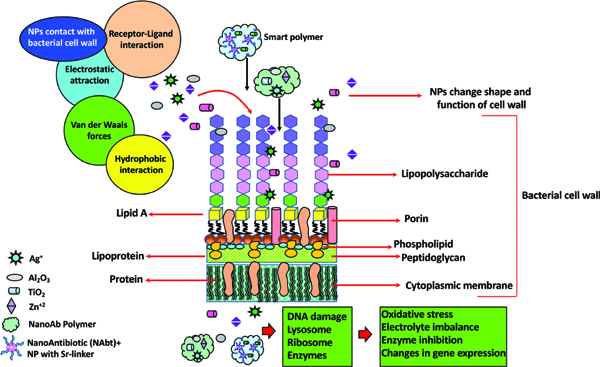