Background: It has been suggested that genetic variation within candidate pharmacogenes contributes to the differences in drug safety and efficacy as well as risk of adverse drug reactions among different ethnic groups. Illustrating the polymorphic distribution of Very Important Pharmacogenes (VIPs) in various ethnic groups will contribute to the development of personalized medicine for those populations.

Objective: The present study aimed to identify the polymorphic distribution of VIPs in the Circassian subpopulation of Jordan and compare their allele frequencies with those of other populations.

Conclusion: Circassians from Jordan significantly differ from other populations in terms of the allelic frequencies of selected VIP variants. The present findings constitute the first set of pharmacogenetic data for Circassian population from Jordan, providing a basis for safe drug administration that may be useful in diagnosing and treating diseases in this ethnic group. 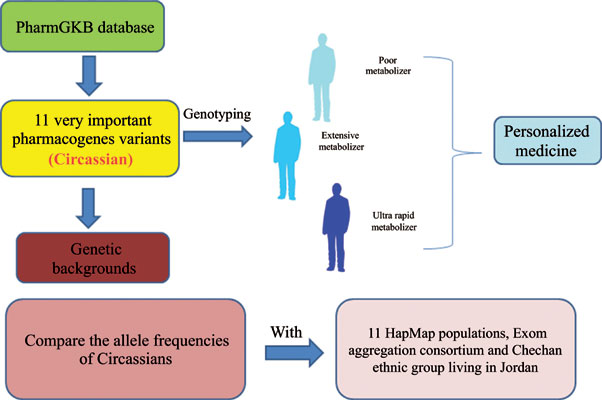