The Relationship Between the Serotonin Metabolism, Gut-Microbiota and the Gut-Brain Axis


Background: Serotonin (5-HT) has a pleiotropic function in gastrointestinal, neurological/psychiatric and liver diseases. The aim of this review was to elucidate whether the gut-microbiota played a critical role in regulating peripheral serotonin levels.

Methods: We searched for relevant studies published in English using the PubMed database from 1993 to the present.

Results: Several studies suggested that alterations in the gut-microbiota may contribute to a modulation of serotonin signalling. The first indication regarded the changes in the composition of the commensal bacteria and the intestinal transit time caused by antibiotic treatment. The second indication regarded the changes in serotonin levels correlated to specific bacteria. The third indication regarded the fact that decreased serotonin transporter expression was associated with a shift in gut-microbiota from homeostasis to inflammatory type microbiota. Serotonin plays a key role in the regulation of visceral pain, secretion, and initiation of the peristaltic reflex; however, its altered levels are also detected in many different psychiatric disorders. Symptoms of some gastrointestinal functional disorders may be due to deregulation in central nervous system activity, dysregulation at the peripheral level (intestine), or a combination of both (brain-gut axis) by means of neuro-endocrine-immune stimuli. Moreover, several studies have demonstrated the profibrogenic role of 5-HT in the liver, showing that it works synergistically with platelet-derived growth factor in stimulating hepatic stellate cell proliferation.

Conclusion: Although the specific interaction mechanisms are still unclear, some studies have suggested that there is a correlation between the gut-microbiota, some gastrointestinal and liver diseases and the serotonin metabolism. 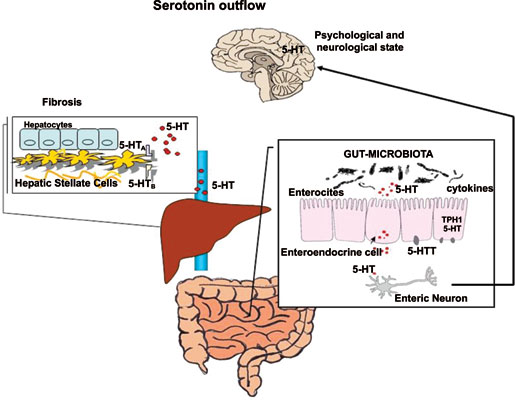