Interethnic Variations of UGT1A1 and UGT1A7 Polymorphisms in the Jordanian Population


Background: Glucuronidation is one of the most important phase II metabolic pathways. It is catalyzed by a family of UDP-glucuronosyltransferase enzymes (UGTs). UGT1A1 and UGT1A7 catalyze the glucuronidation of a diverse range of medications, environmental chemicals and endogenous compounds. Polymorphisms in the UGT1A gene could potentially be significant for the pharmacological, toxicological and physiological effects of the enzymes.

Objective: The UGT1A gene is polymorphic among ethnic groups and the aim of this study was to investigate the different UGT1A1 and UGT1A7 polymorphisms in Circassians, Chechens and Jordanian-Arabs.

Methods: A total of 168 healthy Jordanian-Arabs, 56 Circassians and 54 Chechens were included in this study. Genotyping of 20 different Single-nucleotide polymorphism (SNPs) was done by using polymerase chain reaction- DNA sequencing.

Results: We found that Circassians and Chechens have significantly higher allele frequencies of UGT1A7*2, UGT1A7*3 and UGT1A7*4 than the Jordanian-Arab population, but all three populations have similar frequencies of UGT1A1*28. Therefore, Circassians and Chechens are expected to have significantly lower levels of the UGT1A7 enzyme with almost 90% of these populations having genes that encode low or intermediate enzyme activity.

Conclusion: This inter-ethnic variation in the UGT1A alleles frequencies may affect drug response and susceptibility to cancers among different subethnic groups in Jordan. Our results can also provide useful information for the Jordanian population and for future genotyping of Circassian and Chechen populations in general. 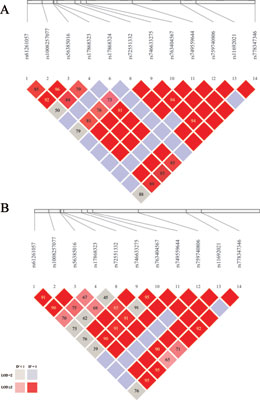