Background: Recent US Food and Drug Administration (FDA) draft guidance on pharmacokinetic drugdrug interactions (DDIs) has highlighted the clinical importance of ABC transporters B1 or P-glycoprotein (P-gp), hepatic organic anion-transporting polypeptide transporters and breast cancer resistant protein because of their broad substrate specificity and the potential to be involved in DDIs. This guidance has indicated that digoxin, dabigatran etexilate and fexofenadine are P-gp substrate drugs and has defined P-gp inhibitors as those that increase the AUC of digoxin by ≧1.25-fold in clinical DDI studies. However, when substrate drugs of both CYPs and P-gp are involved in DDIs, it remains that the mechanisms of DDIs will be quite ambiguous in assessing how much the CYPs and/or drug transporters partially contribute to DDIs.

Objective: Since there are no detailed manuscripts that summarizes P-gp interactions unrelated to CYP metabolism, this article reviews the effects of potent P-gp inhibitors and P-gp inducers on the pharmacokinetics of P-gp substrate drugs, including digoxin, talinolol, dabigatran etexilate, and fexofenadine in human studies. In addition, the present outcome were to determine the PK changes caused by DDIs among P-gp substrate drugs without CYP metabolism in human DDI studies.

Conclusion: Our manuscript concludes that the PK changes of the DDIs among P-gp drugs unrelated to CYP metabolism are less likely to be serious, and it appears to be convincing that the absences of clinical effects caused to the PK changes by the P-gp inducers is predominant compared with the excessive effects caused to those by the P-gp inhibitors. 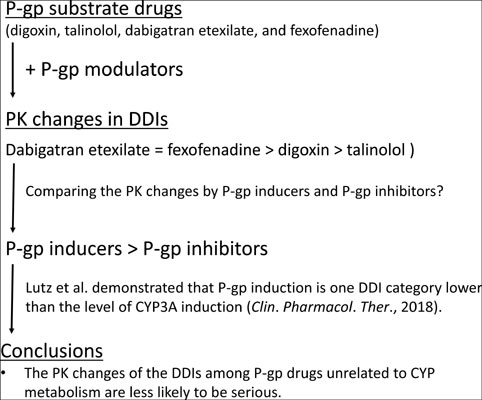