Background: The endocrine system of vitamin D is involved in an extensive variety of biological processes such as bone metabolism, regulation of cell proliferation and differentiation and modulation of the immune response. The active form of vitamin D, 25-hydroxyvitamin D, binds to vitamin D receptor (VDR) controlling the synthesis of many different proteins. Although numerous studies reported polymorphism in the VDR gene, the impact of the polymorphic alleles on VDR protein function remains unknown.

Methods: We presented a comprehensive review of the evidence on the role of genetic polymorphisms, especially those of VDR, in vitamin D-related disorders including their clinical implications. Relevant papers we identified be an extensive search of bibliographic databases using appropriate keywords.

Results: VDR gene variants seem to influence many biological endpoints, including those related to osteoporosis. BsmI, ApaI, and TaqI are the three adjacent single nucleotide polymorphisms in the VDR gene which have been most frequently studied so far. These polymorphisms are apparently nonfunctional, and one or more functional polymorphism elsewhere in the VDR gene, and linkage disequilibrium may explain the association between VDR genes polymorphisms and common diseases.

Conclusion: In different study populations, different alleles of the anonymous restriction fragment length polymorphisms can be found associated with the same endpoint. This effect probably reflects that linkage disequilibrium, between the anonymous marker alleles and the causative alleles in (or very near) the VDR gene, is likely to be different between populations. 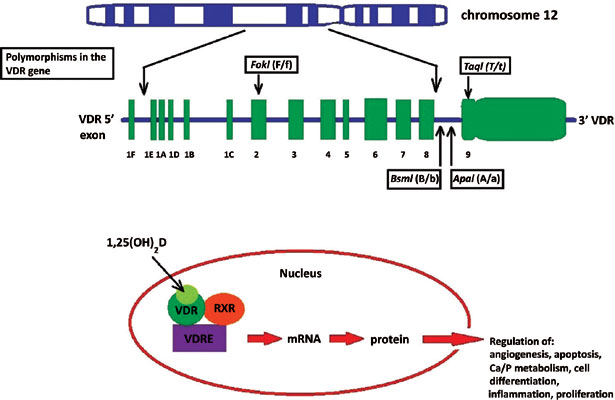