The Relationship Between Lithium and Cancer Proliferation: A Case-Based Review of the Literature


Background: The incidence and mortality rates of cancer in patients with Bipolar Disorder (BD) is higher compared with the general population. The role of Lithium (Li) in cancer proliferation/inhibition is still a controversial issue in the literature.

Objective: Based on a clinical case with lithium intake and development of a renal tumor, we aimed to explore the relationship between Li use and tumor proliferation, with regard to the mechanism of action of Li.

Method: We present evidence of a female patient with bipolar disorder I, who had been on Li for several years, either as monotherapy or in combination with Valproate (VPA). While on Li monotherapy, the patient had undergone unilateral nephrectomy due to a chromophobe cell renal tumor. A literature search was performed using keywords bipolar disorder, medical comorbidity, cancer, renal tumor, lithium, mood stabilizers, valproate and mechanism of action.

Results: The limited data on the relationship between Li and cancer proliferation in clinical populations support neither a positive relationship between long-term Li use and increased urinary tract cancers nor an overall cancer risk. Growing evidence identifies effects of Li on cancer proliferation through inhibition of glycogen synthase kinase-3β (GSK-3β), modulations of redox status, inflammatory changes, pro-/anti-apoptotic mechanisms, and mitochondrial function changes.

Conclusion: Despite the presence of contradictory data, a substantial body of evidence mainly from molecular studies points to Li’s anti-carcinogenic effects. However, the underlying mechanistic pathways remain unclear. Mitochondrial dysfunction and redox modulations are potential areas for research on the relationship between Li and cancer proliferation. 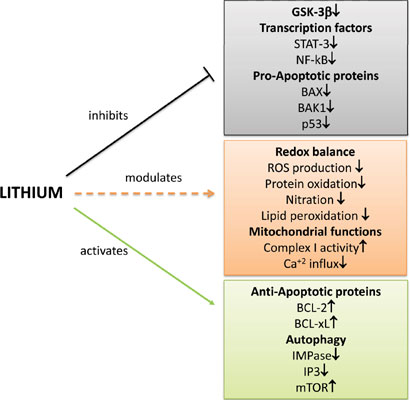