Effects of GHB On Psychomotor and Driving Performance


Background: Gamma-hydroxybutyrate (γ-hydroxybutyrate or GHB) is a physiological compound of mammalians with specific receptors in central nervous system (CNS). Apart from an endogenous production, GHB is also an exogenous molecule found in pharmaceutical as well as in illicit formulations. Products manufactured and spread in these two fields, whose borders are all but strictly defined and traced, differ for the in vivo effects and for the potential of abuse. Illicit GHB gained public attention due to its use as a sexual assault facilitator. Notwithstanding its popularity, the effects on human performances, are still not completely understood and could be more complex than expected. Therefore, there is a real public safety concern regarding psychomotor functions and driving abilities due to GHB ingestion.

Objective: To provide an updated and complete review on the effects of GHB on psychomotor, cognitive and driving performance that may be useful for judiciary expert forensic evaluation of driving under the influence of GHB (GHB-DUI).

Method: Experimental animal-based and human-based studies and case series or epidemiological studies regarding driving under influence of GHB (and its precursors) were reviewed using main scientific databases.

Results: The effects of GHB on cognitive, psychomotor and driving performance are dose-related in experimental studies. In real cases of driving under the influence of GHB, severe impairment is observed. In these cases, a wide range of blood GHB levels are found. Possible long-term effects are also reported.

Conclusion: GHB causes cognitive and psychomotor impairment and risky driving behavior. Multiple aspects and variables are still waiting clarification, such as the harmful potential of illicit preparations, the effect of precursors and impairing dosages. GHB (and its precursors) must be considered a substantial personal and public risk even in the absence of a clear dose-effects correlation. 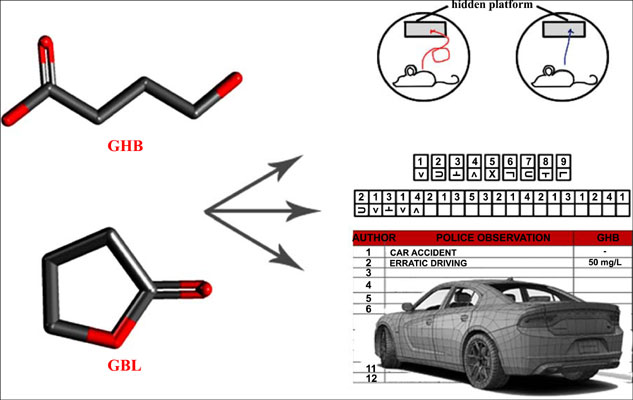