We are not Alone in Our Body: Insights into the Involvement of Microbiota in the Etiopathogenesis and Pharmacology of Mental Illness


Background: The etiopathogenesis of psychiatric disorders is still not completely understood. Growing evidence supports the hypothesis that mental illness and related disturbances do not necessarily originate in the brain. Inflammation has been suggested to play a central role in psychiatric disorders and altered levels of peripheral cytokines have been reported in several studies. Recently, it has emerged that bacteria populating the human gut could modulate low-grade inflammation, as well as high-order brain functions, including mood and behavior. These bacteria constitute the microbiota, a large population comprising 40,000 bacterial species and 1,800 phila involved in key processes important to maintain body homeostasis.

Method: In this review, we present and discuss studies exploring the role of dysbiosis and products of the gutmicrobiota in the pathogenesis of psychiatric disorders, as well as their potential involvement in mediating the effect of antidepressants, mood stabilizers, and antipsychotics.

Results: Although this field is still at its early stage of development, a growing number of studies suggest that an altered composition of the gut microbiota, together with translocation of bacterial products into the systemic circulation, might play a role in the pathogenesis of psychiatric disorders as well as in response to psychotropic medications.

Conclusion: An altered composition and functioning of gut microbiota have been reported in psychiatric disorders, and recent findings suggest that gut bacteria could be involved in modulating the efficacy of psychotropic medications. 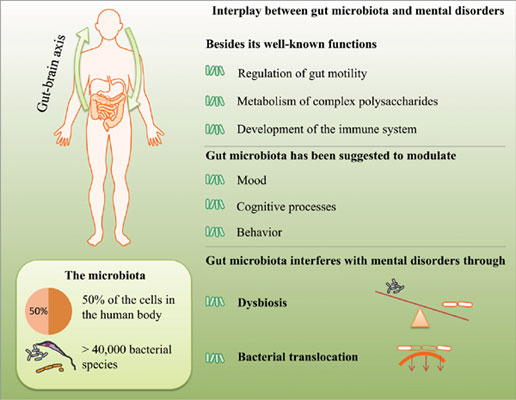