Prediction of Tissue to Plasma Concentration Ratios of Drugs in the Rat from Experimentally Estimated Volume of Distribution: Application of Allometry


Background: In Physiologically Based Pharmacokinetic (PBPK) models, the most important input parameter is tissue-to-plasma partition coefficient (Kp). Over the years, several empirical methods have been developed to predict Kp in animals.

Objectives: The objective of this study was to propose two allometric methods to predict Kp from experimentally determined in vivo volume of distribution at steady state (Vss).

Results: Comparison of the predicted Kp values by the two proposed methods with experimentally determined Kp values indicated that 67-72% of the predicted Kp values were within two-fold prediction error. The predictive power or accuracy of method 1 (when taken all tissues and all classes of drugs into account) was 19%, 35%, 14%, 35%, 14%, and 13% better than the methods proposed by Arundel, Berezhkovskiy, Jansson et al., Poulin et al., Poulin- Theil, and Rodgers et al. respectively.

Conclusion: The proposed two allometric methods are slightly more accurate than other empirical methods in their predictive performance for the prediction of tissue Kp values for acidic, weak bases and neutral drugs. 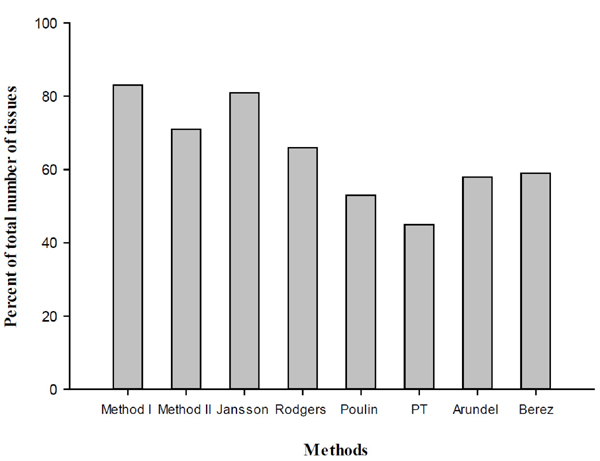