Background: The etiopathogenetic mechanisms of peripheral neuropathies include genetic, traumatic, toxic, metabolic, infectious, nutritional, inflammatory and paraneoplastic causes. Their treatment should primarily address their contributing causes. However, symptomatic therapy is also key in these conditions, particularly in pain relief.

Method: Relevant studies were identified using the PubMed electronic database in January 2017. After a preliminary search, we focused on the single compounds for which randomized controlled trials versus placebo or comparing high and low doses were performed. Studies in which a combination of different compounds was tested were not considered, with the exception of complex B multivitamins.

Results: Several nutraceuticals have been used in the treatment of peripheral neuropathies and seem promising, due to assumed neurotrophic action, low toxicity and favorable metabolic profile. We performed a review of the literature to evaluate safety and effectiveness of nutraceutical compounds in peripheral neuropathies, focusing on the single agents for which randomized controlled trials versus placebo were performed. Vitamin B complex, alpha lipoic acid, L-acetylcarnitine, vitamin E and Coenzyme Q proved effective to different extents in neuropathic pain in polyneuropathies. They all proved less consistently effective on other neuropathic symptoms, neuropathic signs and neurophysiological parameters. All the considered compounds were tolerable even for long periods, however alpha lipoic acid at doses equal or larger than 1200 mg/die was associated with nausea and vomiting in a large number of patients.

Conclusion: The findings of this review confirm a possible role for some adequately dosed nutraceuticals in the management of peripheral neuropathy. 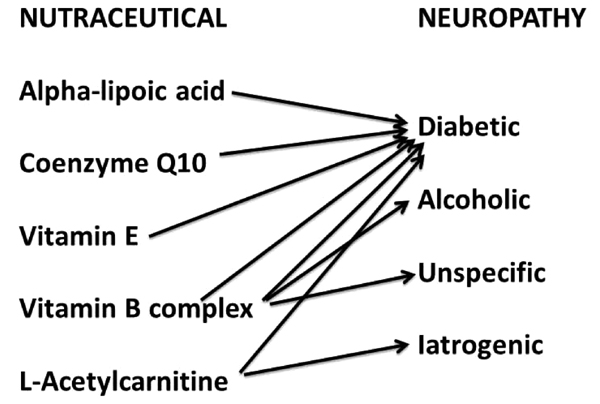