Background: Herbal drugs are being used worldwide in a variety of debilitating neurological and psychiatric disorders such as cerebrovascular accident, Alzheimer's disease, Parkinson's disease and schizophrenia. However, unlike drugs of modern medicine, herbal drugs are complex products containing multiple pharmacologically active constituents. The nature and relative amounts of these constituents vary due to diverse factors such as but not limited to source of the plant(s), local environmental conditions, parts of the plant used, storage, method of extract preparation, accidental contamination or intentional adulteration. Further, they are handled by the human body like modern drugs and subjected to the processes of absorption, distribution, metabolism and excretion. In each of these processes, they can potentially interact with modern drugs due to sharing of similar transport proteins, metabolizing cytochrome P450 (CYP450) enzymes and uptake / efflux pumps. Moreover, herbal drugs can also inhibit or induce CYP450 enzymes or inactivate transporters leading to Herb-Drug interactions (HDIs).

Method: In this narrative review, we have analyzed the clinically reported as well as potential HDIs between 10 common herbal drugs viz. Ginkgo, Ginseng, St. John's Wort, Grapefruit, Black and Long Pepper, Curcumin, Brahmi, Kava, Garlic and Valerian and modern medicines used in neurological and psychiatric disorders with their proven or postulated underlying mechanism(s).

Results: Though a number of potential pharmacokinetic and/or pharmacodynamic HDIs have been examined, clinically significant alteration of response to modern medicines and/or serious adverse effects are apparently scarce except for Grapefruit and St. John's Wort.

Conclusion: Physicians and patients should exercise caution when using herbal drugs and modern medicines concomitantly so that the recognized serious HDIs can be avoided. 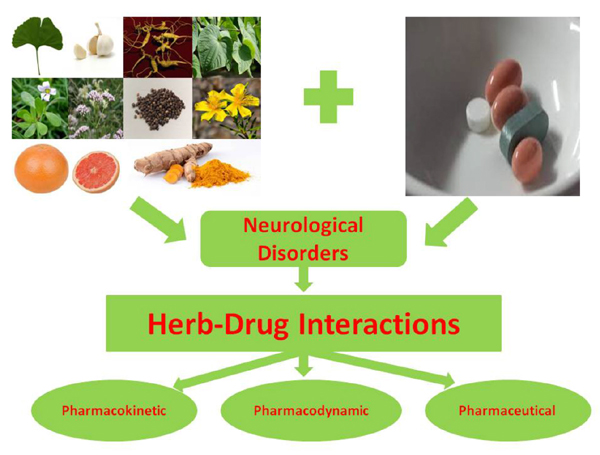