Translational Shift of HSP90 as a Novel Therapeutic Target from Cancer to Neurodegenerative Disorders: An Emerging Trend in the Cure of Alzheimer's and Parkinson's Diseases


Background: Despite having extensive research, the apparent pathogenic mechanism of Alzheimer's disease (AD), Parkinson's disease (PD) and other neurodegenerative diseases (NDs) have not yet fully understood. The Heat Shock Protein 90 (HSP90), a ubiquitous molecular chaperone, found to have an important role in averting protein misfolding and aggregation through inhibition of apoptotic activity in neuro-inflammatory diseases. Various researchers have confirmed its role in maintaining aberrant neuronal protein's functional stability to a great capacity. It is also involved in regulating the activity of the heat shock factor-1 (HSF-1), a vital regulator of the heat shock response mechanism that cells employ to protect themselves against stress conditions. This quality makes the HSP90 an ideal candidate for novel inhibitory target for therapeutic modality in NDs.

Methods: An extensive literature search was conducted for relevant studies on PubMed, ScienceDirect, Springer- Link etc. The articles were carefully read in their entirety to determine whether they contained information on the topic of interest. Additionally, the reference sections of these articles were searched manually to get more relevant and eligible studies.

Results: We have taken an attempt to reveal how HSP90 play important roles with key neuronal proteins involved in supporting the AD and PD pathology. We have further on structure-function relationship of HSP90 to understand its efficacy as a new target in AD and PD by utilizing new generation of HSP90 inhibitors such as geldanamycin and its derivatives, 17-AAG, 17-DMAG, IPI-504, radicicol and its derivatives. HSP90 inhibition leads to suppress atypical neuronal activity by assisting in improving protein aggregation and its related toxicity. Further, the formation of neuronal aggregates is also influenced by HSP90 inhibitors and provides protection from toxicity of protein through HSF-1 activation and HSP70 induction in AD.

Conclusion: HSP90 inhibition has emerged as a potential target in treating diverse array of diseases especially NDs. In spite of a large amount of research in this direction, the clear cut molecular mechanisms of HSPs associated with neuroprotection are still poorly elucidated and hence more focus is needed toward HSPs and its inhibitory mechanism. The development of HSP90 inhibitors that induce heat-shock response without cytotoxicity for treatment of NDs are still in its early stage. A panel of novel designed research and clinical trial studies are greatly needed to establish the therapeutic reliability and efficacy of HSPs in order to provide best cure for NDs. 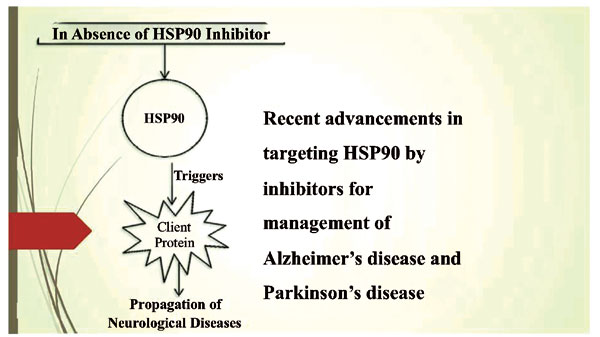