Background: To date more than 3000 miRNA sequences have been described in humans and registered at miRBase since their discovery. However, the functions of only a few of these miRNAs have been experimentally determined using deep sequencing technology. Aberrant miRNA expression has been associated with differentiation, invasion and metastasis in several cancers. In this context, recent reports have suggested that miRNAs play important roles in the regulation of target genes by binding to complementary regions of messenger transcripts to repress their translation or regulate degradation. In addition, the expression profiles of certain miRNAs can function biologically as oncogenes and tumor suppressor genes.

Method: In this review, we summarize the relationship between miRNAs expression and Bladder Cancer (BC). A comprehensive review of the literature has shown a differential expression between malignant and normal tissues, and that miRNAs could be the driving molecules of the BC progression. Similarly, the expression levels of miRNAs in urine and blood samples of BC patients have been demonstrated to be different from healthy people, a finding that might have diagnostic value.

Conclusion: In conclusion, the understanding of miRNAs mechanisms and cell distribution provides new opportunities for diagnosis, prognostic, disease monitoring and personalized therapy of BC patients. 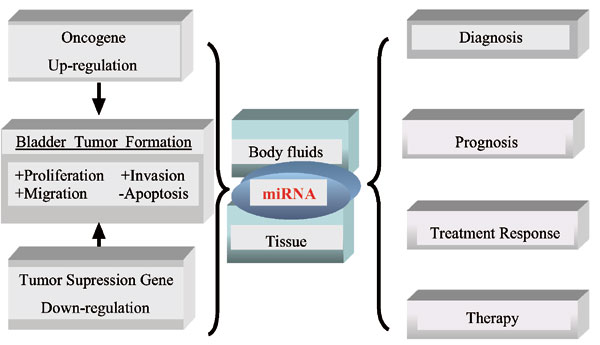