Background: Reactive species have been regarded as by-products of cellular metabolism, which cause oxidative damage contributing to aging and neurodegenerative diseases. However, accumulated evidence support the notion that reactive species mediate intracellular and extracellular signals that regulate physiological functions including posttranslational protein modifications. Cysteine thiol groups of proteins are particularly susceptible to oxidative modifications by oxygen, nitrogen and sulfur species generating different products with critical roles in the cellular redox homeostasis. At physiological conditions, reactive species can function not only as intracellular second messengers with regulatory roles in many cellular metabolic processes but also as part of an ancestral biochemical network that controls cellular survival, regeneration, and death.

Objective: To propose a biochemical network, called cellular cysteine network (CYSTEINET), which can be dysregulated in Parkinson’s disease. Due to the fact that there are many cysteine-bearing proteins and cysteine-dependent enzymes susceptible to oxidative modifications, it is proposed that oxidative-changed proteins at cysteine residues may be critical for Parkinson’s disease development. Conclusion: In the present review, I advance the concept that “cysteinet” is impaired in Parkinson’s disease resulting in a functional and structural dysregulation of the matrix of interconnected cysteine-bearing proteins, which in conjunction with reactive species and glutathione regulate the cellular bioenergetic metabolism, the redox homeostasis, and the cellular survival. This network may represent an ancestral down-top system composed of a complex matrix of proteins with very different cellular functions, but bearing the same regulatory thiol radical. Finally, the possible role of N-acetylcysteine and derivatives to regulate “cysteinet” and slow down Parkinson’s disease development and progression is discussed. 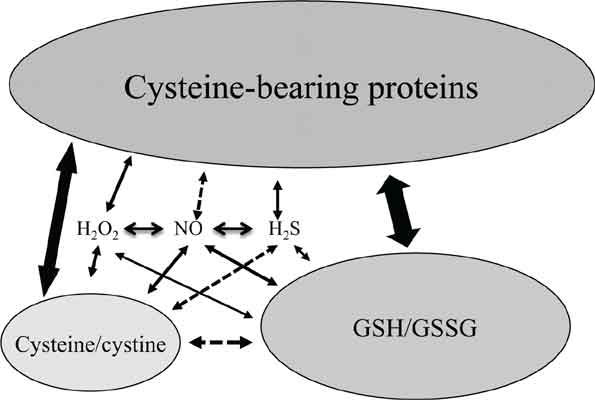