Background: In recent years, the significance of cytochrome P450 enzymes (CYPs) has expanded beyond their role in the liver. Factors such as genetics, environmental toxins, drug biotransformation and underlying diseases mediate the expression of these enzymes. Among the CYP enzymes, CYP2E1, a well-recognized monooxygenase enzyme involved in the metabolism of various endogenous and exogenous substances, plays a crucial role in the brain concerning the development of Parkinson’s disease. The expression of CYP2E1 varies in different brain regions making certain regions more vulnerable than others. CYP2E1 expression is inducible which generates tissuedamaging radicals leading to oxidative stress, mitochondrial dysfunction and ultimately neurodegeneration.

Objective: Less is understood about the role of CYP2E1 in the central nervous system, therefore the purpose of the study was to investigate the relationship between the expression and activity of CYP2E1 enzyme relevant to Parkinson’s disease and to identify whether an increase in the expression of CYP2E1 is associated with neurodegeneration.

Methods: The objectives of the study were achieved by implicating an unsystematic integrative literature review approach in which the literature was qualitatively analysed, critically evaluated and a new theory with an overall view of the mechanism was presented.

Results: The contribution of CYP2E1 in the development of Parkinson’s disease was found to be significant as the negative effects of CYP2E1 overshadowed its protective detoxifying role.

Conclusion: Overexpression of CYP2E1 seems detrimental to dopaminergic neurons, therefore, to overcome this, a synthetic biochemical is required, which paves the way for further research and development of valuable biomolecules. 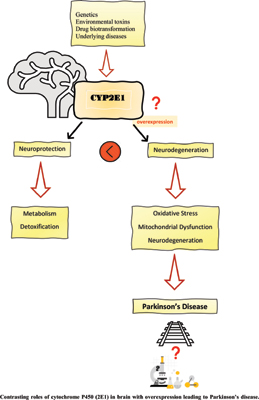