The Role of Biotransformation in the Activity of Endocrine Disruptors


An “endocrine disruptor” has been broadly defined as an exogenous chemical that interferes with the production, release, transportation, metabolism, binding, action, or the elimination of endogenous hormones, which are responsible for homeostasis, reproduction, development or behaviour. Diverse groups of chemicals such as pharmaceuticals, phytoestrogens, natural hormones, and synthetic chemicals such as pesticides, plasticizers, phthalates, parabens, polychlorinated/polybrominated biphenyls, bisphenols are shown to interfere with the endocrine system, and they have been defined as EDs in the last three decades.

As for all chemicals, the biotransformation of EDs has a decisive role in their potential toxic effects. Humans are exposed to vast amounts of diverse chemicals throughout their lives. Fortunately, most of the chemicals are converted via biotransformation reactions catalyzed by the enzymes, into more hydrophilic metabolites, which are readily excreted in urine or bile. Biotransformation reactions resulting in less toxic metabolites are known as detoxification. However, some biotransformation reactions are called bioactivation, in which more toxic metabolites are formed. In the case of EDs, metabolites formed via bioactivation usually have a higher affinity for a hormone receptor or induce/inhibit an enzyme involved in the synthesis or catabolism of an endogenous hormone more dramatically compared to their parent compound. In the present review, the role of bioactivation in endocrine modulating effects of chemicals from all groups of EDs, namely endogenous estrogens, phytoestrogens, synthetic/industrial chemicals, and pharmaceuticals it can be were discussed. 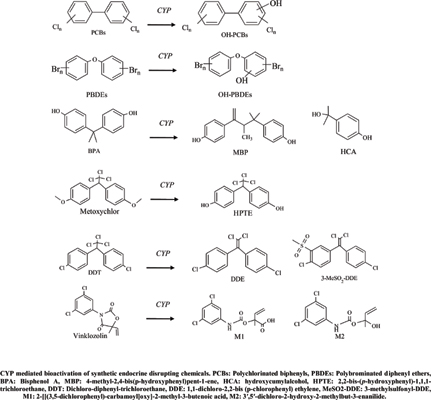