Polycyclic aromatic hydrocarbons (PAHs) represent a class of widely distributed environmental pollutants that have been primarily studied as genotoxic compounds. Their mutagenicity/genotoxicity largely depends on their oxidative metabolism leading to the production of dihydrodiol epoxide metabolites, as well as additional metabolites contributing to oxidative DNA damage, such as PAH quinones. However, both parental PAHs and their metabolites, including PAH quinones or hydroxylated PAHs, have been shown to produce various types of non-genotoxic effects. These include e.g., activation of the aryl hydrocarbon receptor and/or additional nuclear receptors, activation of membrane receptors, including tyrosine kinases and G-protein coupled receptors, or activation of intracellular signaling pathways, such as mitogen-activated protein kinases, Akt kinase and Ca2+-dependent signaling. These pathways may, together with the cellular DNA damage responses, modulate cell proliferation, cell survival or cell-to-cell communication, thus contributing to the known carcinogenic effects of PAHs. In the present review, we summarize some of the known non-genotoxic effects of PAHs, focusing primarily on those that have also been shown to be modulated by PAH metabolites. Despite the limitations of the available data, it seems evident that more attention should be paid to the discrimination between the potential non-genotoxic effects of parental PAHs and those of their metabolites. This may provide further insight into the mechanisms of toxicity of this large and diverse group of environmental pollutants. 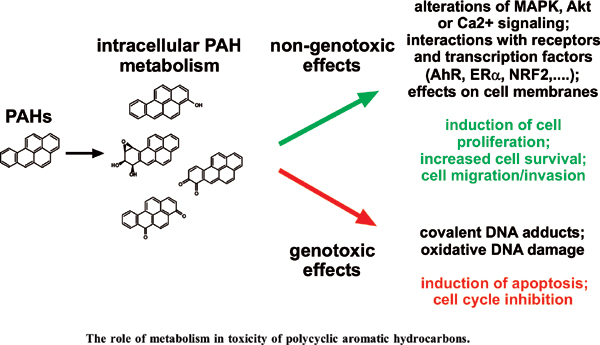