Parkinson’s disease (PD) is believed to be one of the commonly found adult-onset movement disorder occurring due to neurodegeneration and striatal dopamine deficiency. Although clinical diagnosis depends on the occurrence of bradykinesia and other cardinal motor features, PD is linked with many non-motor symptoms that are responsible for overall disability. Among several factors, genetic and environment-related factors are thought to be the major ones accountable for PD. Comprehensive research has shown that a number of drugs are effective in providing symptomatic relief to the patients suffering from PD. But some drug molecules suffer from significant drawbacks such as poor bioavailability and instability, therefore, they sometimes fail to deliver the expected results. Hence, to resolve these issues, new promising novel drug delivery systems have been developed. Liposomes, solid lipid nanoparticles, nanoemulsion, self-emulsifying drug delivery system (SEDDS), niosomes are some of the novel drug delivery system (NDDS) carriers that have been explored for enhancing the CNS concentration of levodopa, apomorphine, resveratrol, and other numerous drugs. This paper elucidates various drugs that have been studied for their potential contribution to the treatment and management of PD and also reviews and acknowledges the efforts of several scientists who successfully established various NDDS approaches for these drugs for the management of PD. 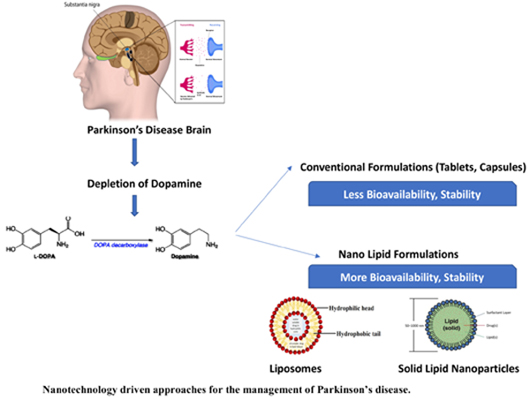