Introduction: Infectious diseases have been responsible for an increasing number of deaths worldwide. Staphylococcus aureus has been recognized as one of the most notable causative agents of severe infections, while efflux pump (EP) expression is one of the main mechanisms associated with S. aureus resistance to antibiotics.

Objective: This study aimed to investigate the potential of α-pinene as an efflux pump inhibitor in species of S. aureus carrying the TetK and MrsA proteins.

Methods: The minimum inhibitory concentrations (MIC) of α-pinene and other efflux pump inhibitors were assessed using serial dilutions of each compound at an initial concentration above 1024 μg/mL. Solutions containing culture medium and bacterial inoculums were prepared in test tubes and subsequently transferred to 96-well microdilution plates. The modulation of ethidium bromide (EtBr) and antibiotics (tetracycline and erythromycin) was investigated through analysis of the modification in their MICs in the presence of a subinhibitory concentration of α-pinene (MIC/8). Wells containing only culture medium and bacterial inoculums were used as negative control. Carbonyl cyanide m-chlorophenylhydrazone (CCCP) was used as a positive control.

Results: The MIC of ethidium bromide against S. aureus strains RN-4220 and IS-58 was reduced by association with α-pinene. This monoterpene potentiated the effect of tetracycline against the IS-58 strain but failed in modulating the antibacterial effect of erythromycin against RN-4220, suggesting a selective inhibitory effect on the TetK EP by α- pinene.

Conclusion: In conclusion, α-pinene has promising effects against S.aureus strains, which should be useful in the combat of antibacterial resistance associated with EP expression. Nevertheless, further research is required to fully characterize its molecular mechanism of action as an EP inhibitor. 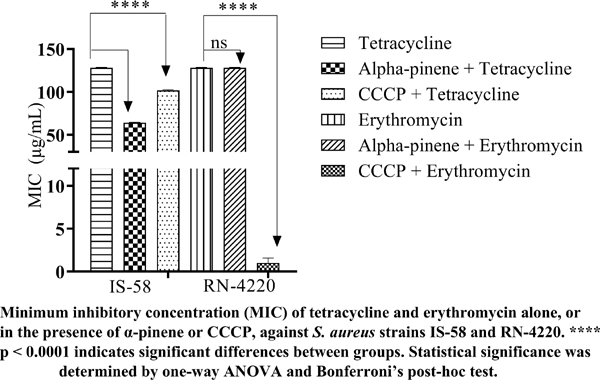