Secondary Metabolites in the Treatment of Diabetes Mellitus: A Paradigm Shift


Diabetes mellitus (DM) is a chronic, polygenic and non-infectious group of diseases that occurs due to insulin resistance or its low production by the pancreas and is also associated with lifelong damage, dysfunction and collapse of various organs. Management of diabetes is quite complex having many bodily and emotional complications and warrants efficient measures for prevention and control of the same. As per the estimates of the current and future diabetes prevalence, around 425 million people were diabetic in 2017 which is anticipated to rise up to 629 million by 2045. Various studies have vaguely proven the fact that several vitamins, minerals, botanicals and secondary metabolites demonstrate hypoglycemic activity in vivo as well as in vitro. Flavonoids, anthocyanin, catechin, lipoic acid, coumarin metabolites, etc. derived from herbs were found to elicit a significant influence on diabetes. However, the prescription of herbal compounds depend on various factors, including the degree of diabetes progression, comorbidities, feasibility, economics as well as their ADR profile. For instance, cinnamon could be a more favorable choice for diabetic hypertensive patients. Diabecon®, Glyoherb® and Diabeta Plus® are some of the herbal products that had been launched in the market for the favorable or adjuvant therapy of diabetes. Moreover, Aloe vera leaf gel extract demonstrates significant activity in diabetes. The goal of this review was to inscribe various classes of secondary metabolites, in particular those obtained from plants, and their role in the treatment of DM. Recent advancements in recognizing the markers which can be employed for identifying altered metabolic pathways, biomarker discovery, limitations, metabolic markers of drug potency and off-label effects are also reviewed. 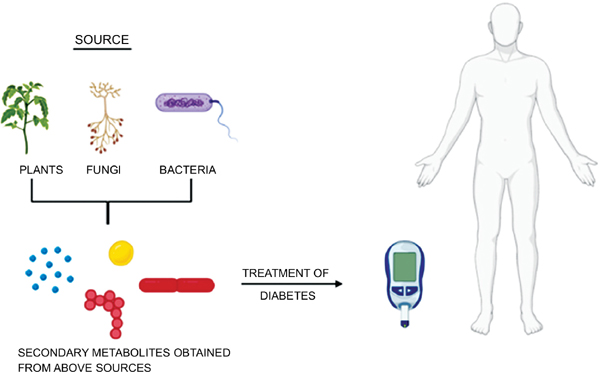