Genetic Analysis of Pharmacogenomic VIP Variants of ABCB1, VDR and TPMT Genes in an Ethnically Isolated Population from the North Caucasus Living in Jordan


Background: Differences in individual responses to the same medications remarkably differ among populations. A number of genes that play integral roles in drug responses have been designated as very important pharmacogenes (VIP), as they are responsible for differences in drug safety, efficacy, and adverse drug reactions among certain ethnic groups. Identifying the polymorphic distribution of VIP in a range of ethnic groups will be conducive to population-based personalized medicine.

Objective: The aim of the current study is to identify the polymorphic distribution of VIP regarding the Chechen minority group from Jordan and compare their allele frequencies with other populations.

Methods: A total of 131 unrelated Chechen individuals from Jordan were randomly recruited for blood collection. Identification of allelic and genotypic frequencies of eleven VIP variants within the genes of interest (ABCB1, VDR and TPMT) was carried out by means of the MassARRAY®System (iPLEX GOLD).

Conclusion: Significant differences in allelic frequencies of eleven ABCB1, VDR and TPMT VIP variants were found between Jordanian Chechens and other populations. In our study, most populations that are similar to Chechens are those from South Asian, European (Finnish) and European, including: Utah residents with Northern and Western European ancestry, Toscani in Italia, Mexican ancestry in Los Angeles and Circassian from Jordan. The level of similarity between Chechens and those populations means that they might have shared high levels of gene flow in the past. The results obtained in this study will contribute to the worldwide pharmacogenomic databases and provide valuable information for future studies and better individualized treatments. 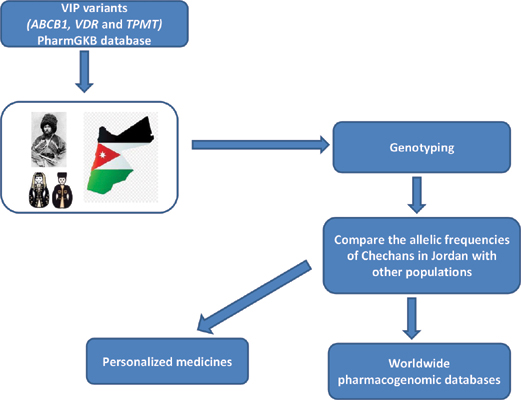