Aim and Objective: To review the applications and production studies of reported antileukemic drug L-glutaminase under Solid-state Fermentation (SSF).

Overview: An amidohydrolase that gained economic importance because of its wide range of applications in the pharmaceutical industry, as well as the food industry, is L-glutaminase. The medical applications utilized it as an anti-tumor agent as well as an antiretroviral agent. L-glutaminase is employed in the food industry as an acrylamide degradation agent, as a flavor enhancer and for the synthesis of theanine. Another application includes its use in hybridoma technology as a biosensing agent. Because of its diverse applications, scientists are now focusing on enhancing the production and optimization of L-glutaminase from various sources by both Solid-state Fermentation (SSF) and submerged fermentation studies. Of both types of fermentation processes, SSF has gained importance because of its minimal cost and energy requirement. L-glutaminase can be produced by SSF from both bacteria and fungi. Single-factor studies, as well as multi-level optimization studies, were employed to enhance L-glutaminase production. It was concluded that L-glutaminase activity achieved by SSF was 1690 U/g using wheat bran and Bengal gram husk by applying feed-forward artificial neural network and genetic algorithm. The highest L-glutaminase activity achieved under SSF was 3300 U/gds from Bacillus sp., by mixture design. Purification and kinetics studies were also reported to find the molecular weight as well as the stability of L-glutaminase.

Conclusion: The current review is focused on the production of L-glutaminase by SSF from both bacteria and fungi. It was concluded from reported literature that optimization studies enhanced L-glutaminase production. Researchers have also confirmed antileukemic and anti-tumor properties of the purified L-glutaminase on various cell lines. 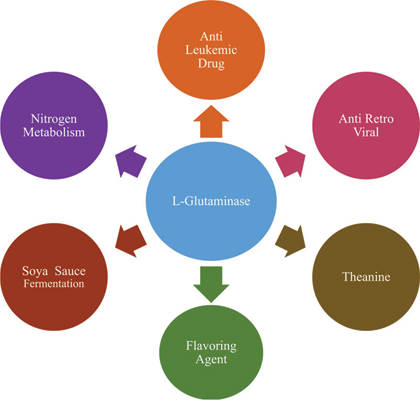